Lately, I’ve been feeling stuck — like, one step forward, 900,000 steps backward kind of stuck. So, naturally, I reached out to my hippie-est of yogi friends and asked them for some tips on how to shift my energy and cultivate positive, forward-moving vibrations. They all had the same answer: try kundalini yoga — which, honestly, was the exact opposite of what I wanted to hear.

Let me preface by saying that I’m a yoga teacher who supports all forms of yoga. But, for some reason, the few times I’ve tried kundalini, I’ve really disliked it, so I’ve avoided doing it at all for a long time now. It’s not like I don’t know that it’s supposed to be amazing for you; it’s just that I feel like sh*t every time I do it.

If you’ve never heard of the practice until now, KundaliniYoga.org defines it as “an ancient art and science dealing with the transformation and expansion of consciousness, the awakening and raising of Kundalini Energy up the spine.” The site further explains that when you perform certain, kundalini-based exercises and meditations in a specific sequence, it allows you to consciously direct the flow of energy within your body.

So, let me ask you something: Now that you know what kundalini yoga is, is it really that surprising to know how intimidated I’ve always been by the practice? Just reading the description of kundalini yoga is kind of overwhelming, isn’t it?

Despite my hesitations, though, I decided to keep an open mind and give it a go with a 30-minute kundalini practice on YogaGlo, an online platform that features thousands of professionally filmed yoga, meditation, and lecture classes.

I was immediately drawn toward one of Kia Miller’s classes on the platform, called “Awaken Inner Strength.” In the online description of the class, Miller explained that the sequence is meant to allow you to “tap into the energy reserve at your navel point to shake off stuckness” (yay), and “break through any barriers of the past.” Basically, if you have those “stuck,” disconnected, or uninspired vibes lingering inside of you for one reason or another, this class will “get your energy moving quickly,” and by the time you’re done, Miller wrote, you’ll “walk away feeling happy and uplifted.” I was sold. Get at me, kundalini.

The practice opened with a quick round of surya namaskar (aka sun salutations), which got my heart pumping right off the bat. Plus, as a vinyasa practitioner, I already knew how to do sun salutations properly, so I began my practice feeling a bit more confident that maybe, just maybe, I would actually like this kundalini class.

After the sunny warm-up, Miller didn’t waste any time before directing me into a rocking bow pose.

Aaaand, goodbye, confidence. I’m not exaggerating when I say that this pose almost made me cry because of how hard it was. Between the swift, front-to-back movements and the sharp, in-and-out breaths, which I was supposed to link with each of my movements, I could feel the energy moving quickly, almost aggressively, throughout my body, and I kind of just wanted to turn the video off and stop the practice right then and there.

But I didn’t. I stuck it out through a couple of minutes of rocking bow, and proceeded to dramatically collapse on the floor once it was over.

I’m extra, I know. But that, right there, is exhaustion at its finest, my friends — and I was only, like, five minutes into the class at this point.

According to Veronica Parker, a kundalini yoga teacher and meditation coach, the “cleansing and clearing process” of kundalini can sometimes make you “feel more tired, less focused, and more confused” — yep, that sounds about right. “In particular, if we are resisting this change, consciously or unconsciously, then it could take longer for us to begin to feel the incredible benefits of a kundalini yoga class,” Parker tells Elite Daily over email.

There it is, fam. Here’s the thing: I’m the kind of person who’s resistant to change at first, so when I took a moment to really think about why I dislike kundalini yoga so much, with Parker’s words in mind, I knew that, deep down, it was because I was subconsciously resisting the change in energy that the practice provokes. That’s the thing that’s been holding me back this whole time. It all makes sense now, and I’m glad I stuck it out for the rest of the practice, despite how fatigued and overwhelmed I still felt.

For the rest of the class, Miller led me through a dynamic bridge pose, followed by a series of standing exercises to help “twist, shake and punch away stagnation” — literally.

Seriously, as part of her class, Miller instructs you to literally dance around and punch the air to get rid of stagnation in the body. And, look, I truly admire how joyous and genuinely thrilled she looks while teaching this stuff, but TBH, I was still feeling all kinds of uncomfy doing these things IRL. Still, I decided to plaster a smile on my face and channel Miller’s carefree spirit — and, surprisingly enough, it actually helped a lot. Letting loose and bringing out my inner child during these exercises made kundalini feel a lot more accessible and approachable.

At this point, I could feel the energy in my body moving upward — and I know that might sound really ~out there~, but according to Parker, that’s exactly how kundalini is supposed to make you feel. She tells Elite Daily that, at the beginning of a typical kundalini practice, your body’s energy is usually lying dormant at the bottom of your spine. Then, she explains, “through breathing exercises, meditation, and kriyas (succession of poses during a class), we awaken this energy, which is really our creative potential, and it begins to rise toward the head. In this process, we elevate our consciousness and vibe while clearing out beliefs and thought patterns from our subconscious.”

So it seems that, for me, a more childlike approach to kundalini was the key to enjoying it more. Once I allowed myself to be carefree, and loosened the reigns on my resistant mindset, the practice suddenly didn’t seem so intimidating.

Still, sitting in meditation at the end of the practice was wild. There was so much energy vibrating throughout my body that I almost felt anxious, like I was at a total a loss for what to do with myself. So, I took a child’s pose, and allowed all that energy to simply pass through me. And with that, my practice was over.

Someday I want to try kundalini again, but I’m not going to lie: I still have a pretty big aversion to it. If you’re in the same boat as me, Parker has some great advice on the subject: “My advice, from my own experience and that of my students, is to stick with it,” she says. “Commit to the practice and absolutely know your energy, body, and subconscious are totally shifting for the best. Before you know it, you will begin to feel more energized, focused, [and] filled with creativity and inner peace.”

Want more glitter?
Sign up to be notified of new content. Plus, get a FREE Meditation from Veronica!
OptinMonster allows you to explode your email list by using our incredible exit intent technology. 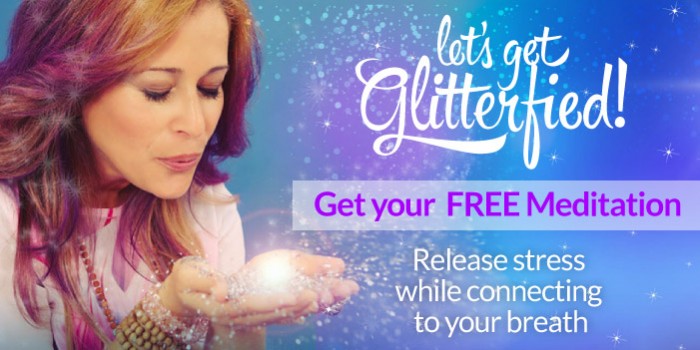